So this happened today... New SawStop. 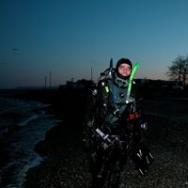 3hp PCS, 52" with overarm dust guard, and ICS mobile base.  3 1/2 days from placing the order to delivered into my garage... not too shabby.  I had a great experience with Equipment Sales and Surplus

Quick saw update: the kids had gymnastics tonight, so I found myself with a free hour. The mission: move the saw body to the shop.  The manual says it weighs 300lbs or so... and my hand truck purports

Because a half finger is not much better than no finger.