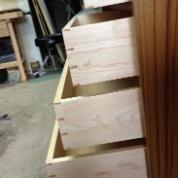 All of these benches are "alright" compared to my $150 harbor freight bench!!

I love this thread. I also really like my Roubo. I've already done a thread on it. But here's a couple of pictures for you all.

Thanks!   It is..  Just wish I'd of made better wood and vise selections.   It will always be in my shop as it was my first build.  Was also my first attempt at MT joinery as well.