What's on the bench.

Fitting drawers and this drawer just would not close. It was flawless smooth 10 min ago there is no way the humidity changed already.... Might help if i removed my work light i guess. ..

It’s been a couple of weeks since I made it but I don’t think I ever posted my bench. Got tired of having the top on sawhorses temporarily for the last few years. Bought the Record vise last year when 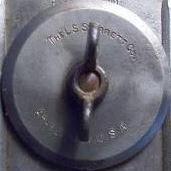 Right now my wrenches are on my bench. I spent a good part of the weekend cleaning them and painting the engravings to improve visibility.